With 2022 in the books, we take a look at what's been happening in and around Lake Erie.

10. Great Lakes Islands Come Together to Seek Solutions. What do island residents do about routine healthcare? Can you order from Amazon? What about preschool? Water quality? There are 35,000 islands in the Great Lakes, but only 30 of them are inhabited. Representatives from those islands met in Lake Erie last fall to seek creative solutions to these island issues.

9. Photographer Cody Evans Captures Face in Wave. Taken this fall in Port Stanley, Ontario, the photo is of a wave that took the form of a man’s face, complete with pursed lips, a stern jaw and a head of hair that would make anyone jealous. “I was there for two days and took over 10,000 photos,” says Evans. “I usually go to the lake on windy days for that purpose and have been trying for a few years now.” Evans says he was inspired by the work of fellow Port Stanley photographer Dave Sandford, who began the "liquid mountains" movement.

8. The Canadian Border Reopens. Once the strictest of the pandemic restrictions were lifted, it was still difficult to get to Canada. You had to fill out paperwork online and, then, could randomly be selected to do self-testing once you arrived, which we were — and it resulted in a two-hour delay to our trip as we figured out how to set up the online video call to take the test. But, effective Oct. 1, absolutely all pandemic-related restrictions were lifted, meaning it's as easy as ever to spend the weekend in Windsor, tour Niagara Falls or hit one of the many wineries along the north shore.

7. The Marblehead Lighthouse Turns 200. It's one of the most iconic images from Lake Erie — and one of the best lighthouses to visit thanks to its state park status. Pack a picnic and eat overlooking the lake, wander the property's trails, fish off the giant rocks, visit the lighthouse museum or head to the top for panoramic views of the lake.

6. New Vessels Set Sail on Lake Erie. At the beginning of boating season, Kelleys Island Ferry Boat Line introduced travelers to the magnificent Carmen Lee, a 168-foot vessel capable of holding 148 passengers and up to 36 vehicles. Built to accommodate the exciting increase of visitors from the mainland to the island, it's the fleet's largest vessel and travels all day, year-round. Earlier this year, Toledo's J&M Cruise Lines also launched a new vessel — the Glass City Pearl, which carries guests on a two-hour tour to Put-in-Bay. Both of these new wonders of the water join the Mary Ann Market, which landed on Lake Erie's surfaces in 2021 to provide up to 600 passengers and 28 vehicles transportation from Catawba Island to Put-in-Bay.

5. A Seiche Offers Once-in-a-Lifetime Views of the Bottom of Lake Erie. It was all captured by photographer Barry Koehler and predicted by the Great Lakes Environmental research labratory, which issued the following advisory: "The upcoming winter storm is predicted to cause a massive seiche in Lake Erie, with a water level difference of nearly 20 ft (6 m) between Toledo & Buffalo!"

4. Governor DeWine implements H2Ohio. The program is expected to reduce the nutrient run off from farm fields which contribute to harmful algae in Lake Erie. These algal blooms threaten the health of the 11 million people who get their drinking water from Lake Erie.

3. Fisherman Smashes Smallmouth Bass Record. Grant Gallagher and his dad, Gregg, were out on what they thought was an ordinary fishing trip when they reeled in a 10.15-pound smallmouth bass, setting a new record for the Great Lakes. The previous record of 9.5 pounds was set in 1993.

2. Toledo Completes Giant Mural. And it's the largest mural in the United States. Located on the east bank of the Maumee River in Toledo, Ohio, the new Glass City River Wall spans 28 silos. 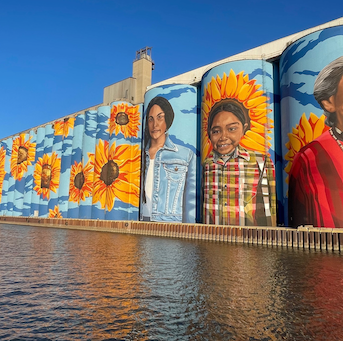 1. Cheating Fishermen Are Caught. We've all heard by now how two fishermen were accused of stuffing weights in their Walleye in an effort to win an Ohio fishing tournament. But the flip side to that bad news was the resulting uproar by the Lake Erie fishing community which reinforced what we already knew: Lake Erie fishing is a sport built on effort and honor.

Discover more than a dozen ways to beat the seasonal blues and take advantage of the region’s variety of indoor and outdoor activities and entertainment.

Inspired by the work of Dave Sandford, Evans took thousands of images over the course of several years to get the shot he wanted.

From corn mazes and pumpkin patches to apple orchards, distilleries and more, discover the many reasons we’re all about autumn around Lake Erie.

Reps from 20 islands in the Great Lakes Islands Alliance met in October to brainstorm solutions for common challenges of life surrounded by water.

What started as a hobby has turned into much more for Kelly Hand and her sunrise surf crew.